How Does Opportunity Cost Factor Into Your Finances? 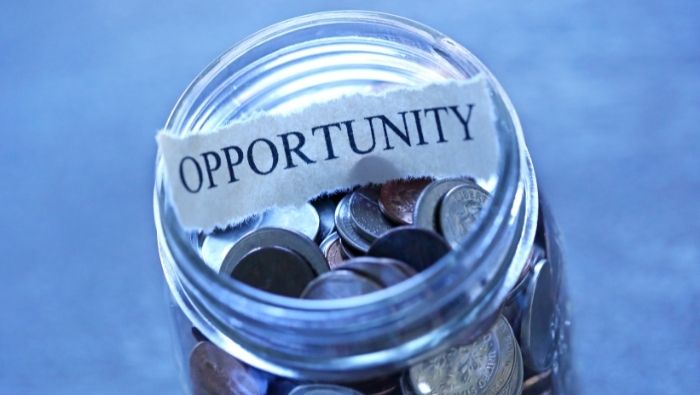 If you don’t know what opportunity cost is, then you’re likely not factoring it into your financial decisions. And it could be costing you a lot of money.

Want to hear a cautionary tale of (my own) financial stupidity?

A couple of times a year, the company where I work offers employees the opportunity to purchase a limited number of shares in the company at a discounted price. If you opt in, some money gets withheld from each of your paychecks over a six-month period, and at the end of it, you receive your shares to hold or sell as you see fit.

Now, having to wait six months to see part of your pay hurts a little, so my husband and I procrastinated on signing up. And then we kept procrastinating. Besides, we rationalized, stocks are always a risky investment, right?

But one day, after many years of this (I’m a little slow), it hit me that if we participated and chose to sell the shares as soon as we were eligible to do so, we’d be virtually guaranteed to earn at least the small margin between our discounted price and the market price because the shares would have no time to lose value. In other words, there really was no risk. So solely because of our unwillingness to wait a little while for a portion of my pay, I calculated that we’d thrown away in the neighborhood of $35,000 in profits over the years that I’d been declining to participate in the program.

Related: Delayed Gratification Could Make You a Millionaire

What is opportunity cost and what does it have to do with your finances?

In the business world, I recently learned that this $35,000 is known as opportunity cost. Opportunity cost is a concept I guess I’ve always been dimly aware of, but haven’t used consistently to make financial decisions until now. Simply put, it is the price of the best alternative you gave up in order to have the things you have.

So say you are contemplating blowing a buck on a pack of Twinkies. Is it worth it? You could just eat that squished granola bar you found in the back of your truck and were going to throw away.

Before you decide, you should remember that the opportunity cost of buying the Twinkies could really be a lot more than one dollar.

Say, for example, that if you saved it and invested it in your company’s 401k plan, your employer would match it. Then it would be two dollars. If you left your two dollars in the fund to grow in value until you retire, by that time, maybe it would be three or four dollars. Four dollars for a couple of Twinkies? Kind of steep! Right?

And, if you really want to hold up the line at the vending machine, ponder the ways that opportunity cost can compound. What if, upon retiring, instead of treating yourself to four packs of Twinkies with your 401k earnings, you did something else smart with your money? Maybe you could find a way to turn that four dollars into six or eight. (See The Big Difference Compound Interest Can Make to Small Savings.)

In my case, for instance, if I’d earned my $35,000 and then invested it in paying my mortgage down early, I could have saved many more thousands of dollars on interest. In the long run, the real cost of the opportunity I threw away was probably $50,000 or more.

As my husband’s grandmother used to say when any of her offspring would complain about being broke, “If I’d had your money, I could have been a millionaire.”

Sure, the millionaire part may seem like a stretch, but maybe it isn’t. Start calculating the value of the opportunities you’re giving up and see how far it can take you.