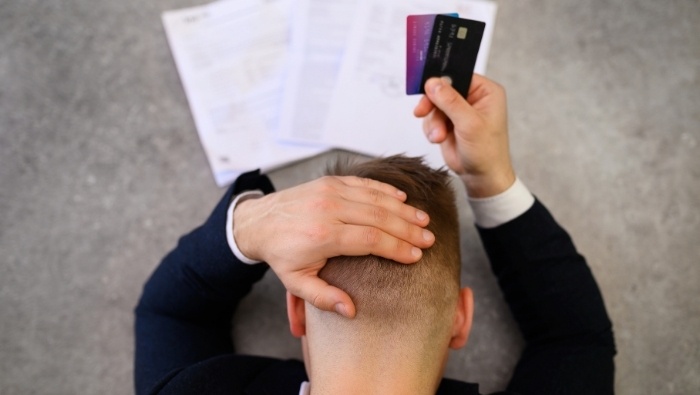 So you want to ‘disjoint’ your joint credit card accounts? It isn’t always easy to do. Here are the options that may be available to you.

Norm and his brother have gotten into a pretty tough situation. But there are some things that they can do to help his brother to get a mortgage. There’s also a lesson for all of us in how to avoid similar situations. A lesson that also applies to couples involved in divorce.

The legalities of joint credit card accounts: Who is responsible for the debt?

First, let’s take a look at the facts of the situation. When Norm and his brother opened a joint account they both agreed to be completely responsible for paying off any charges. No matter who used the card.

That means that the credit card companies can collect from either brother. Legally it’s just as if Norm’s brother used the card and has fallen behind in his payments. The credit card company won’t remove the brother from the account. That would reduce the odds of them getting paid.

What options do you have for getting out from under joint credit card debt?

So what can the brothers do? Norm is already investigating the best option. That’s to pay off the debts entirely. Once closed, the accounts will show that they were late but are now repaid.

Getting a consolidation loan may be tough. Most lenders want to be able to have a mortgage on a home or some other asset. A ‘secured’ loan (one guaranteed by real property) offers lower rates.

Norm may have some other property that he could put up as collateral. Cars, jewelry, antiques or anything else that has value could work. If he has something like that, the best source for a loan would be a local bank.

There are other sources for loans that Norm should consider. If he has a 401k plan at work, he might be able to borrow against that. Typically there’s a fixed rate of interest which would be lower than what he’s probably paying the card companies now. (See Paying Off Your Debt Using a 401k Loan.)

Norm may have trouble qualifying, but he should investigate and compare balance transfer cards. He might be able to get one under his name alone and move the balance to that card.

If the credit card debt is over $10,000 he can contact a non-profit credit counseling agency. They’ll arrange for a lower interest rate and create a payment plan. Typically it’ll take a few years to completely pay off the loan. But just entering the program might be enough to give his brother some room for the mortgage application. (See Am I a Good Candidate for Credit Counseling?)

Another option, although it might be touchy, would be to borrow the money from his brother. It’s possible that his brother would get a lower interest rate on his mortgage if he took some money from his down payment and used it to pay off the credit cards.

Assuming that none of that is possible, they can include an explanation in his credit report. Norm’s brother should request a copy of his report.

Everyone should check their credit report regularly. Especially before buying a house or car. Independent surveys show that 70% of all credit reports contain errors. Ten percent of the errors are significant enough to cause credit to be denied.

Norm’s brother will want to send a letter to each credit card company. Get a return receipt. In the letter he should simply state the facts. Ask that a note be placed in his credit report. It won’t change his credit score, but a potential mortgage lender might consider the information when they evaluate his mortgage application. In a few weeks he needs to recheck and make sure that the information was added.

Norm’s brother should tell any potential mortgage lender of the situation before he submits an application. By bringing up the problem first he won’t be asking the lender to reconsider a rejection. He’ll be advising them of a potential problem and asking that they give it proper, but not undue attention. It’s possible that Norm’s brother will have to pay a higher interest rate because of the problem.

What can we all learn from this?

Joint accounts can be dangerous. Especially if you’re not the one using the account. Sure, it’s hard to turn down a family member when they ask for help. But if they need your credit rating to borrow money, they probably shouldn’t be borrowing. Don’t help them to dig a deeper hole.

If you really want to help them out financially, loan them the money yourself. Even if it means that you have to borrow it first. At least that way if they can’t make the payments your credit rating won’t get hammered.

Couples in the process of divorce should also be careful. A divorce agreement may specify that one partner pay off a joint account. But if they don’t, the other partner is still liable as far as the lender is concerned. If you’re in that situation make sure that you get statements on the account so you know it’s being paid properly.

Hopefully Norm will get the debts paid and his brother will find a home and mortgage.