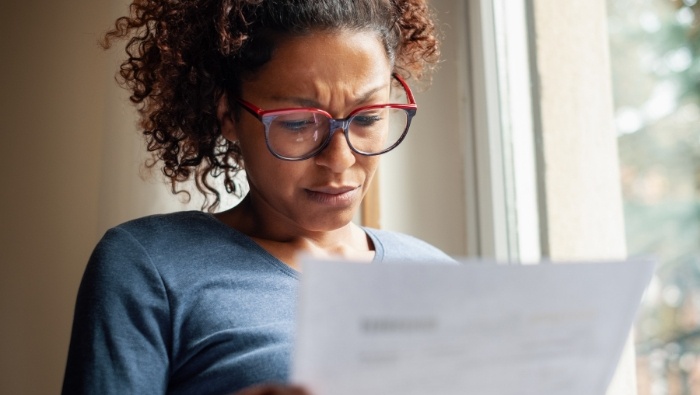 Are you heading for debt trouble? You might be without even realizing it. Here are the debt warning signs you shouldn’t ignore.

Millions of people find themselves in financial trouble each year. Until the last moment many didn’t realize that there was danger ahead. Are there early warning signs that can help you avoid financial disaster later? That’s the question we considered after receiving this letter.

Dear Dollar Stretcher,
I recently had a bad experience with a credit card company. They raised the interest rate from 17.8%, already on the high side, to 22.95% based on my “credit history.” My credit report (from Trans Union for the same month I got the notice) showed that my account with them is “paid as agreed; in prior 48 months from last update never late.” If you have good credit with a finance company, they can still up your rate based on other things in your credit history like:

I accepted their offer to pay them off at the existing rate if I closed the account, which I think was the correct action to take in this case. Is their action part of an overall trend for finance institutions to be tougher on borrowers? How do actions like this affect the growing number of personal bankruptcies? Do the credit card companies promote bankruptcies by increasing interest rates? How do actions like this affect inflation?
Maida W.

Maida asks some interesting questions. And from the statistics available, she’s not the only one in a similar situation. But is she right to be upset with the credit card company? Let’s take a look and see if we can learn something from her experience.

We’ll begin by considering what’s happened with her account. She’s stayed current with her minimum payments, yet the credit card company has said that they don’t want to do business with her anymore. Why is that?

The simple answer is that the card issuer is afraid that Maida will join the ranks of those declaring bankruptcy. Now we all know that Maida is an honest, upstanding citizen and has no intention of walking away from her debts. After all, most bankruptcies are caused by medical bills, divorce, job loss or some other crisis situation.

So why is the company picking on her? It’s because they look at her use of credit cards and see warning signs that she’s more likely than the average person to be forced into bankruptcy. The ‘warning signs’ are based on what’s happened to large numbers of credit card holders in similar circumstances. Before anyone jumps on me as a spokesman for the credit card companies, let me state that I am not paid by them in any fashion. But, frankly, I think that they’re doing Maida a favor. “How’s that?” you ask. Let me explain.

It’s just like when you burn yourself on the stove. The pain is nature’s way of telling you to move your hand or you’ll do permanent damage. The wise person doesn’t argue with the stove. They pull their hand away from the heat.

Maida’s in a similar situation. If she learns to look at the warning signs she can avoid a lot of pain later on.

Let’s see if we can’t all learn what those warning signs are.

When the balance owed on all your cards is increasing.

Compare the total balance on all cards from a year ago to today’s balance. It should be going down, not up. If it has increased by more than 10%, you’re losing ground quickly. Increasing activity is another clue. Total all your credit card charges this month to those you made a year ago. If you’re using your cards to make many more purchases or the total value of the purchases is up significantly, you’ll want to consider whether your card usage is out of control. Take the two-page test. Unless you travel on business, a two-page credit card statement is a sign of trouble.

More than 5% of your take-home income is going to pay off debts.

A quick measurement is to total all the monthly minimums. That total really should be less than 5% of your take-home pay. If it’s between 5% and 15%, you’re starting to get into trouble. A reading over 15% is a sign that you’re running out of time to fix the problem.

What about emergencies? A large number of bankruptcies are caused by unusual events. How can you predict those? You can’t predict when they’ll happen, but you can be sure that some ‘surprises’ will happen. For instance, you might not have an auto repair bill or an accident this year. But over the next five years you would almost expect a large bill of some type on your car.

I can hear some of you saying that it’s impossible to save money for an emergency fund. But, not saving for the “unexpected” doesn’t mean it won’t happen. It just means you won’t have the money to pay for it when it does happen. If you’re already struggling with your bills, that could be enough to push you over the edge.

With these simple tips and tools, you can build an emergency fund, even while living paycheck to paycheck.

You could not pay your bills if you lost your job for an extended period of time.

Could you keep up with your bills? In today’s economy there are no job guarantees. Even in a good economy it can take weeks to months to find another job. If being jobless for a short period would mean falling behind in your payments, it’s time to consider pruning your debts back.

Maida also asked about whether the card companies are actually increasing the number of bankruptcies or causing inflation. And I suppose that you could make an argument that increasing interest rates tend to do both. But, on a practical level, there’s not much an individual can do except take control of your own financial affairs. I’m not overly concerned with the total number of bankruptcies. I just don’t want to be one of them.

Get proactive about tackling your debt.

Get the book How to Conquer Your Debt No Matter How Much You Have and begin the journey to financial freedom today!

In fairness to Maida, most of us would feel the same way if we were in her shoes. No one wants to see their interest rates increase. But sometimes, by looking at events from a different perspective we can gain an idea of what the future holds. And it’s a prudent person who sees danger and avoids it. The fool is the one who ignores warning signs and suffers for it later. Thanks to Maida for an interesting question.