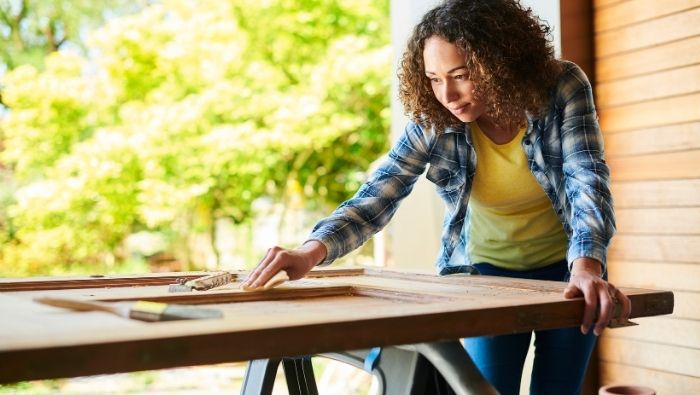 Would you like to make some green by being green? Here’s a look at folks who successfully make money upcycling free or cheap items that might otherwise end up in the trash.

“Upcycling” is what you do when you’re converting waste materials or useless products into new materials or products that are useful. When you upcycle, you’re saving potentially useful materials.

But what if you could make money upcycling?

Today, many folks have to supplement their incomes, but have little money to invest in raw materials or goods to be sold. Clever ones upcycle by finding cheap or free items they can then sell for profit.

How Some Are Making Money Selling Wood

“Jack” never starred in a horror film, but used his chainsaw to make a “killing.” After a storm, he went door to door offering to cut up downed tree limbs and haul them off for a fee. Residents were happy to pay up!

Where did Jack take the wood? He took it to his business, which was a wood lot. He chipped and shredded the brush into mulch and then cut the larger limbs and trunks into logs. The next year, he once again made money from the same downed trees. This time, he was selling bags of mulch and cords of seasoned firewood.

Some entrepreneurs in my grandmothers’ old neighborhood had a different way of selling wood. They sold it as trendy artwork.

Homes in my grandmothers’ neighborhood were built between World Wars I and II. Many properties had detached garages and sheds that were about to fall in after decades of neglect. However, the homeowners could not afford to fix them.

Neighborhood residents were approached by some young businessmen who offered to tear down the dilapidated structures at no charge, taking care of all necessary permits, if the property owner would allow them to haul away the lumber.

Who would want the unpainted, splintered and sometimes termite-infested siding and framework? People making rustic picture frames out of barn wood want it! The entrepreneurs had such a business. They wanted old wood because it had “character” but had run out of sources for it out in the country.

Within weeks, the young men had cleaned up in more ways than one. They cleaned up the old neighborhood by removing dozens of rickety old shacks. They also “cleaned up” by obtaining free materials for their business.

How One Man Makes Money from Old Antennas

Another fellow is also getting free materials.

Noticing that most folks now get their television via cable or satellite, he’s taking advantage of the fact they don’t need or use antennas anymore. He’s advertised online and in the classified ads that he will take down homeowner’s old TV antenna towers, which are tall metal structures that once were used to hoist antennas well above the roofline.

The guy is charging a fee to do this, since it’s not easy to take down a tower. These metal structures could be resold to amateur radio operators, who still use antennas and towers, or taken to the scrap yard for recycling.

“George” lives near an auction site for a major retail chain. After each auction, the chain sells one or more lots of wooden pallets that had been used in their massive warehouses.

George bids on the pallets. When he buys some, he hauls them to his farm, sorts them into sizes, and advertises them online. Small businesses buy the pallets.

George’s profits supplement his retirement pension. He and his wife didn’t have to “downsize” once he left his former job.

Trudy, a college student, is another internet merchant.

“I go to thrift stores and garage sales and find textbooks and teacher books out on the tables,” Trudy said. “I can buy those books for as cheap as a quarter sometimes.”

Trudy resells books online for about half of what they’d cost in stores. She makes a profit, and her customers get a bargain. Her business takes a few hours each week, but nets enough income to pay some bills.

How Some Are Profiting from Old License Plates

Mr. Boyd “upcycles” license plates, and his idea is really for the birds. He makes wooden birdhouses and uses discarded car license plates for the roofs. He simply bends the metal rectangles in half for the housetops. He sells his creations at a crafts mall.

Another artist cuts up and solders such license plates to make collages out of them. The resulting plaques have caught on and sell for hundreds of dollars.