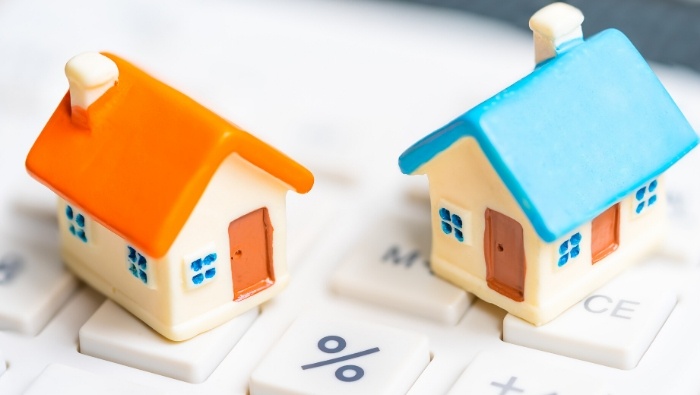 There is a difference between your mortgage APR and the interest rate. An understanding of these two important numbers can help you pay down your mortgage faster and save on interest.

Dear Dollar Stretcher,
Most of us have at least one mortgage these days, but there is so much confusion over the interest. It seems that by the time you’ve paid off your mortgage, the interest costs more than your home. I would love to know how the interest is calculated and how it can end up being way more than the home. Also what is the difference between your APR and your interest rate? Please help.
Jennifer in NC

Like so many people, Jennifer was surprised when she got past the “easy monthly payment” and started learning about mortgages. Let’s see if we can’t help her to understand the basics of mortgage APR (annual percentage rate) and interest rate.

The definitions of APR and interest rate

We’ll start with definitions. According to Investorwords.com, an interest rate is “A rate which is charged or paid for the use of money. An interest rate is often expressed as an annual percentage of the principal. It is calculated by dividing the amount of interest by the amount of principal.” They define APR as “the yearly cost of a mortgage, including interest, mortgage insurance, and the origination fee (points), expressed as a percentage.”

BusinessDictionary.com defines APR a little differently. “Standardized method of quoting the effective interest rate (actual cost of credit) on consumer loans, specially where interest is computed on monthly or other non-annual basis. An APR includes all fees (except penalties), and takes into account the continual reduction of principal amount through amortization.”

Let’s first examine the definition for interest rate. Simply put, it’s a rate that the borrower pays for using the lender’s money. Just like you would pay to rent a car or a punch bowl for a wedding, you pay to rent money.

Interest is typically stated as a percent of the amount owed that’s due every year of the loan. A real simple example would be if I borrowed $100 from you and agreed to pay you back one year from today along with 8% interest. When the year was up I’d need to give you $108 (the original $100 plus $8 interest).

Next we’ll examine how the frequency of compounding effects the real cost of borrowing. In our example, the interest was compounded once a year. But what would happen if we compounded it twice a year? At the end of the year, I would need to pay you $108.16.

Why sixteen cents more than the original example? I’d still have to pay back the same $100 principal, but because the interest is compounded twice each year, we’d need to calculate and add two separate interest payments. For the first six months, I’d owe $4 ($100 principal multiplied by 8% annual interest divided by two equals 4%).

If we were to compound daily, the total due at the end of a year would be $108.33. So even though the interest rate stays the same (8%), the amount that you’ll pay could vary by $0.33 depending on how often interest is compounded. Not a tremendous amount, but it does add up when you’re borrowing hundreds of thousands of dollars. (See also: The 10 Things You Need to Know About Compound Interest.)

The APR will include any additional costs caused by frequent compounding. When it’s used in a mortgage situation, it also includes mortgage insurance and any “points” that came with the mortgage. For most of us, it’s almost impossible to calculate how much we’d owe on a mortgage with all the different variables involved. The APR does that for us. We can take two mortgages and compare the APR on each. You can also use the APR to compare non-mortgage consumer loans.

Related: How We Saved $34k in Interest on Our Mortgage Before Closing

A look at the mortgage interest you can expect to pay

Next let’s look at all the interest that Jennifer expects to pay. She’s right. A traditional 30-year mortgage earns a lot of interest for the lender. To illustrate, we turned to a mortgage calculator. For a 30-year, $200,000 mortgage at 4.5% you’ll pay $164,814 in interest over the life of the mortgage. Just as Jennifer said, it seems like you’re paying more in interest than you originally borrowed.

The higher payments might scare Jennifer. But she still has an option that will reduce interest expense. As long as her mortgage allows for prepayments, she can pay more than the regular payment each month. Have the lender apply the extra money to a reduction in principal. Depending on how much she prepays each month, it could be just as effective as a 15-year mortgage in reducing the amount of interest paid.

Hopefully Jennifer will find both the home and the mortgage that she loves and can afford.