Before Making a Withdrawal from Your 401k to Pay Off Debts 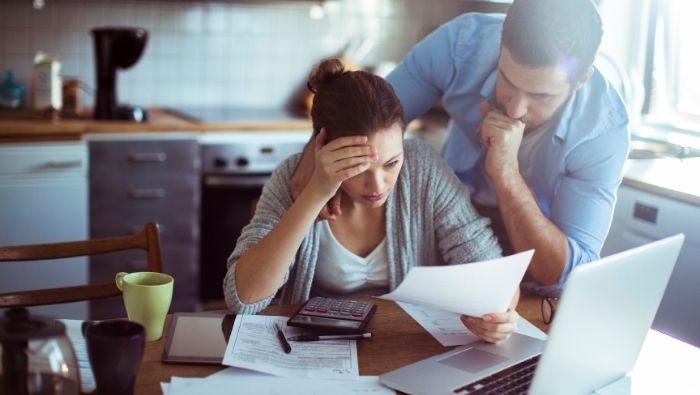 Does it make sense to tap into retirement funds to pay off debt? Perhaps for some, but you might have financially better options. Consider these solutions before taking a withdrawal from your 401k to pay off debts.

Dear Dollar Stretcher,
I am currently in a bad financial situation.

I have drowned my family in credit card debt. To date I owe $21,000. That coupled with other financial obligations means our monthly commitment is about $250 more than our base income. We can only afford to pay the minimum payment on our credit cards because the balances are so high. By doing this we’re barely touching the principal owed. We have negotiated lower interest rates with a couple of our credit card companies.

My wife wants me to tap into my 401K plan and take a hardship withdrawal. But if I do that, don’t I stand to lose a tremendous amount of money due to penalties and taxes? Do we have other options? Better options?
David F.

David’s situation is not an unusual one. Many Americans have spent more than they are making and are struggling to dig their way out of the hole.

Yet, at the same time, many of these same Americans have a nice sum tucked away in a 401k plan. A contradiction? Yes. But even employees struggling with bills find it’s hard to pass up the tax deferral of a 401k plan, especially if the employer matches part of the savings. (See also: Should You Contribute to a 401k If Your Employer Doesn’t?.)

That combination means that more and more people are running into situations like David’s. They have trouble keeping up with their credit card bills. At the same time they have assets stashed away in a retirement plan.

Does it make sense to tap into those funds to pay off current bills?

The math behind using your 401k to pay off debt

Let’s take a look and see what would happen if David did take money out of his 401k plan to pay off bills. To illustrate the point we’ll need to make some assumptions. Assume that he’s 30 years old and expects to retire at age 65.

For David to end up with $21,000 to pay off his bills, he’d need to withdraw $28,000 from his 401k plan. The reason is that he’ll be paying 25% to cover the penalty on early withdrawal and taxes. The penalty is 10% of the money withdrawn. He’ll also pay ordinary income taxes on the money. We used the 15% income tax bracket (the lowest).

David mentions a ‘hardship’ withdrawal. While the 401k plan might allow such a distribution, the chances of being granted a ‘hardship’ that will avoid IRS penalties is not too great. The most common reason granted is for medical bills. Just charging too much on your credit cards doesn’t cut it.

Some options to consider first

He needs to take a hard look at his current income and expenses. If the amount needed is fairly small, he could try to find some simple savings to bring things back in line. Fifty or even $100 per month can be found in groceries, reduced utility bills, insurance or a combination of other smaller savings.

But David says that there’s a $250 per month gap. That’s a fairly serious shortfall. And it’s not likely that he’ll find a simple way to make it up without changing some habits.

More likely, David will need to look at the major expenses in his budget. Typically the biggest items are housing and transportation. It’s not uncommon for a family to spend one third of their after tax income on housing and an additional 15% on transportation.

Unfortunately, cutting expenses in those two areas could require major lifestyle changes. It might mean that David will need to give up the idea of a new car and keep the old one longer. Or perhaps they need to consider becoming a one car household. Even without a car payment, the cost of insurance, gasoline and maintenance can easily come to hundreds each month.

Related: 5 Simple Budget Cuts That Can Save $200 a Month

Changing the amount you spend on housing is another possibility.

If David owns his home, he can consider refinancing. It’s possible that today’s lower rates could provide the $250 per month he needs.

Related: Consolidating Debt into a Mortgage Refinance: Will It Save You Money?

One option would be to use a home equity loan to consolidate his credit card debt.

Suppose that he’s currently paying 18% interest on that credit card debt. Just the interest alone is over $315 per month. A home equity loan at today’s rates would cut the interest. That would go a long way to solving the $250 shortfall.

It’s possible that David doesn’t have equity in his home or doesn’t own his residence. In that case he’ll need to consider whether the family is just living over their means. Obviously that’s not a comfortable thought. Most of us wouldn’t want to move to a less expensive home.

Getting a second job or volunteering for some overtime could cover the shortfall. If the situation is temporary, that might be a good solution.

One other option would be to contact a non-profit credit counseling agency. Sometimes they’re able to negotiate a better payment plan with creditors.

Related: Am I A Good Candidate For Credit Counseling?

The reality is that you can’t overspend $250 each month and not get into financial trouble. Even if David does use the 401k to pay off the current debts, he needs to make sure that his new monthly expenses aren’t greater than his income. Otherwise he’ll be revisiting the same question again in a few years.

Hopefully David and his family will find an easy adjustment to their lifestyle that will cover the shortfall.