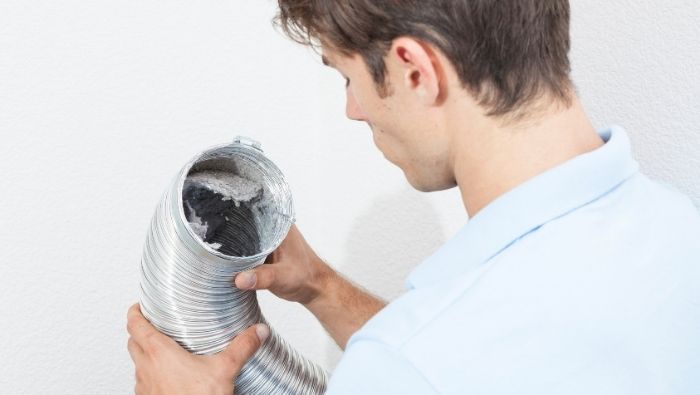 If your clothes dryer isn’t drying so well, you might have a clogged dryer vent. No need to pay a professional vent cleaning service. These tips will help you with cleaning your dryer vent on your own, even when it is on the roof.

Dear Dollar Stretcher,
Can you help with this question? We recently had our dryer vent “swept” by a professional chimney sweep service. The vent from the house to the roof had become so clogged with lint that the dryer was taking as much as two full cycles to dry a load of clothes. This service was expensive (over $100), but we will save in several ways – less energy due to less drying time, prolonging the life of the dryer and avoiding a fire.

Now that we’ve caught on about the dryer vent getting clogged, we feel we should have this done at least every 1-2 years. My question is, is this something we could do this ourselves? And if so, how?
Jean

How much we’re using our dryers

Jean asks a good question. In fact, it’s easy to ignore our dryers and their vents until a problem occurs. But that may be a mistake.

According to TheSpruce.com, the average American household does eight loads of laundry a week. Some estimates say that we spend about $105 each year to run our dryers.

That sure is a lot of dirty clothes! Also a bunch of drying!

Related: The Cost of Using Your Clothes Dryer

How does your dryer work?

All dryers work about the same. It really doesn’t matter whether you use an electric or gas dryer.

What influences how efficient a dryer is?

The next most significant issue is whether the hot air is allowed to circulate through the clothes. Plenty of hot air doesn’t do any good if it can’t warm the clothes. The key here is run full loads, but don’t over-do it. A too-full dryer doesn’t allow air to circulate and is not efficient. Also dry light and heavy clothes separately.

Air flow is the issue that caused Jean her problem. As we dry clothes, lint magically appears. (At least it seems like magic!) Your dryer will have a lint trap. Pull the lint from it after each load. With some clothes you may even need to clean the trap once during the middle of the dry cycle.

After the hot air exits your dryer, it needs to go somewhere. You should have a vent that leads to the outside. It will either be solid aluminum or flexible vent just like your heat and A/C system. If you have the option of deciding how to route your vent, take the shortest route outside. Remember to keep bends to a minimum and avoid any kinks.

You can do some of the same things that the pros do.

A short vent is simple

If you’re fortunate enough to have a short run of vent, you can simply disconnect both ends and reach in. If the vent runs through walls or for long distances, it becomes more difficult.

If your vent runs to the roof, you can try to use a homemade sweep. Tie a toilet bowl brush to a piece of clothes line and drop it into the vent. Make sure that you have the brush tied securely to the line. You don’t want to lose it in the vent. Let gravity do the work. If your vent is pretty much straight up and down, this might help.

Cleaning the vent from the dryer side

You can also tackle the job from the dryer side. Since you won’t have gravity to help, you’ll need something a little stiffer. Nylon rope can work. You might even want to use a plumber’s snake.

Remember, the goal is not surgical cleanliness. You just want to dislodge the lint that collects mostly at the corners.

Using a vacuum to clean out the vent

Another way is to try to vacuum out the lint. You can use anything from a regular vacuum with attachment to a shop vac for the job.

The trick is having a long enough hose to do the job. It doesn’t need to be 50 feet. If you go at it from each end, even a 10 foot hose can cover a lot of vent.

Even if you can’t do the whole job yourself, clean as much as you can. This will allow more air to flow through the vent (making your dryer more efficient) and also increase the time between professional visits.

Before you start you’ll want to empty or replace your vacuum cleaner bag. This job requires all the suction your vacuum can muster.

Related: Maintain Your Appliances and Save

There are a few other dryer tips that you should consider. The first is to dry your clothes outside. Sure it’s a simple answer, but that’s part of the beauty of it. It can’t get any cheaper than free! (See How to Air Dry Clothes without Stiffness.)

If you’re using your dryer, dry two or more loads one after the other. This takes advantage of the heat already in the dryer. If your dryer has a ‘cool down’ cycle, make sure that you use it. You’ll be using heat that you’ve already paid for.

If you can, put your dryer in a heated part of your home. That way you won’t be trying to heat cooler outside air to dry your clothes.

Install a lint kit if you have an electric dryer. Their cost is easily made up by exhausting heat into your home during the winter. It’s a fairly simple do-it-yourself job.

When all is said and done there are probably two things to remember.

First, having a clean vent pays off in dryer efficiency.

Second, do as much of the job as you can yourself. Even if you can’t do it all yourself, you’ll delay the day that you have to call a professional.