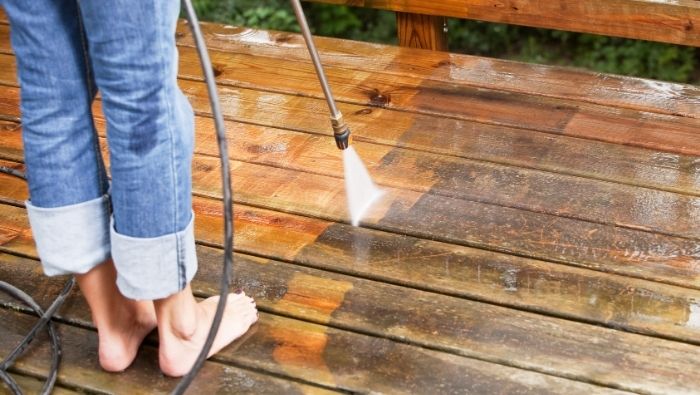 A deck is a marvelous place to spend some time during the summer months. It is undoubtedly an ideal location to entertain guests.

But decks grow old and tired.

So let’s take a look at your deck and see what you can do to restore it to its former glory. Look for signs of peeling paint or stain, loose nails, debris accumulation, and splintered or discolored wood. This happens because of exposure to rain, snow, sun, dust, and wind throughout the year. Keep a maintenance checklist, so you can mark off things as you get them done.

See if any nails or fasteners have come loose. If they have, replacing them is better than trying to fix them.

When replacing the nails, stainless steel screws or galvanized screws might be better for a longer-lasting repair. You can pinpoint any raised fasteners by dragging a rake across the deck.

If the deck has stairs, check to see that these are in good condition. If the railings have a missing screw or become shaky, fix them first.

Debris is likely on the deck, especially if you haven’t used it in a while.

First, sweep off any dirt and debris. Then use a putty knife to pry out any debris that might have gotten caught between deck boards. You can then use a hose to spray the deck with water and flush out any remaining dirt.

If there is any mildew formation, you can use a bleach and water solution to wash the deck. Then spray water on it until it is clean. Keeping the deck clean in this manner will prevent rot and mildew. Mildew is generally found in shady areas, so if you can clear the shrubbery around the deck a bit, so it gets enough sunshine, you can save some effort.

If any boards have decayed beyond repair or are badly cracked, they will have to be replaced. Before you start replacing the boards, look at the deck’s frame. If the frame is not satisfactory, it is better to pull down the whole deck and rebuild it. However, if the structure is good, you can pull out the damaged boards and put in some new ones.

First, check your nearest home improvement outlet or lumber yard for deck boards that match your existing deck. Removing damaged boards that were screwed down is pretty straightforward. You just have to unscrew them. Boards that have been nailed down will have to be removed using a circular saw to cut the decking between joists. Measure and cut the board to the required length. Also, measure and cut a piece of decking and then just screw in or nail down the new boards.

If you have a wooden deck, you can either stain or paint it. Semi-transparent or solid stains and deck or porch paint will work. Clear sealers and water-repellent preservatives are not required because they don’t protect the wood from UV radiation or moisture.

Staining might be a better idea if your deck sees a lot of activity because stain wears better. Always ensure that the staining is done on as sunny a day as possible. The wood of the deck must be dry, and it needs to sit for about 24 hours after staining for it to cure the right way.

If you are motivated to perform a total deck makeover, you might want to consider changing the material the deck is made of. Treated wood and natural stone are the traditional options, and a more recent option is a deck made of composite material. It is considered a more durable and robust option than wood since it can withstand termites. It also does not splinter and is highly weather-resistant.

A composite material deck is made of recycled material and is highly eco-friendly. Since the composite material is available in varied colors and sizes, it is gaining popularity. Deck tiles are also popular and come in wood and stone options too.

Depending on the size of the deck and the kind of damage it has, it can take you anywhere from a couple of hours to a few days to complete the project. Make sure you are wearing protective gear, including gloves and eye protection, during the process.

If it is a wooden deck, then be sure to keep it dry at all times. Do not ignore the upkeep of railings, balusters, post caps, and deck lights.

Benjamin Roussey is from Sacramento, CA, and grew up doing all varieties of home improvement projects around the home since his parents did not hire contractors or outside help to maintain their home or vehicles. As a result, he has acquired a multitude of home handyman skills in plumbing, carpentry, electrical and everything in between.