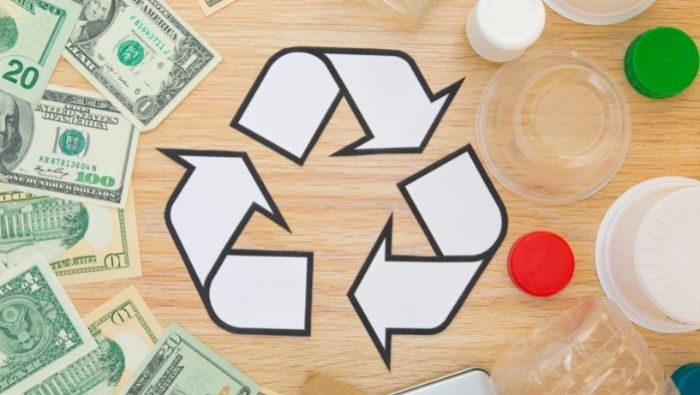 Many people are using discards in new ways. They’re turning trash into cash with practical and creative recycling. Maybe you should be on the lookout for reusable items that can save or make you money.

Australian children love Vegemite sandwiches as much as American kids love peanut butter and jelly. Vegemite is a sandwich spread, full of Vitamin B. This product is actually a byproduct; it’s made from brewer’s yeast left over from manufacturing beer. But it sells like hotcakes “down under.”

When we visited Russell’s Pecan Orchard in Gholson, Texas, the building seemed surrounded by a gravel parking lot. Driving up closer, we discovered the “rocks” were actually thousands of old pecan hulls spread out on the ground.

I’m told one motel chain has its housekeepers collect and save bars of soap that guests have unwrapped and used. The soap is ground up and liquefied. The resulting product is used to mop the tile floors.

In all these examples, businesses have used discards in new ways. It’s a frugal method of saving money. They’re turning trash into cash. The businesses are getting more uses out of something that otherwise would be thrown away.

You don’t have to be in business to do this. Smart, frugal folks are always on the lookout for reusing items.

For instance, Norm’s job required him to wear uniforms. Each week, he received five cleaned uniforms on heavy wire hangers. He wasn’t supposed to return the hangers. Instead of throwing them out, he saved them for the annual church garage sale. Volunteers found the clothing donated by parishioners sold much more quickly if garments were hung up instead of folded on tables, and Norm’s hangers allowed them to do this.

Norm’s church was housed in a 100-year-old wood framed building. To insulate it, members collected large amounts of Styrofoam packaging “peanuts.” Removing some upper clap boards from the exterior, they poured the “peanuts” between the inner and outer walls. This method worked and used a product that would have gone to the landfill.

Using recycled items in your yard or garden

Gardeners use the byproducts of their kitchens (fruit and veggie scraps and coffee grounds) in their compost each year. The food scraps are recycled in to beautiful flowers and delicious vegetables.

Mr. Chadwick lived in town but had a farm in the country. He’d collect the leaves from his large oaks and gather bags of leaves others had left for the garbage collection. He’d take the leaves to the farm and plow them under for free organic fertilizer.

Joe the Bartender’s tavern threw out dozens of amber beer bottles. One day, Joe filled his pickup truck with them. Buried upside down in his yard, they make great borders for his flowerbeds and walkways.

Jack is a janitor. His institution discards dozens of plastic gallon jugs each day. He collected several and took them home. After painting them black, he filled them with water and put them into his greenhouse. Jack has accumulated enough jugs to stack them up to the ceiling on one side. The winter sun warms the black containers. At night, they give off just enough heat to keep his plants from freezing.

Jack was told to throw away an old rubber doormat that was showing its age. This doormat was a giant industrial-sized one that ran the width of the building’s multiple front doors. Jack didn’t mind the tiny cracks in the doormat. Today, it serves a new purpose as a makeshift patio in his backyard. Jack already has his eye out for the replacement doormat. When it’s thrown out, he wants to cut it up and use it as a walkway separating the sections of his “Square Foot” garden.

Related: Repurposing Items for Your Garden and Outdoor Living Space

In all these examples, frugal folks have figured out how to creatively re-use free items. It’s a “green” practice that uses trash to save cash. What do you have around your home or worksite that can be re-used in a novel but useful way?