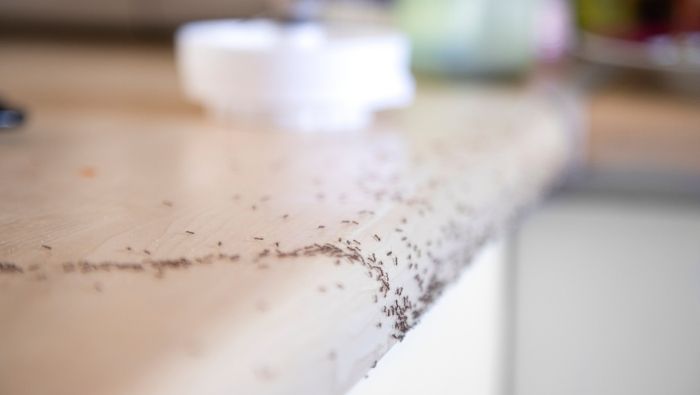 Are you fighting an ant invasion in your home? These inexpensive all-natural ant repellents will help you get rid of ants without using chemicals or spending a lot on commercial pest products.

Dear Dollar Stretcher,
It’s that time of year again. Ugh! Ants! And I just can’t seem to keep them out of the house. I’ve tried following trails and caulking the cracks that they seem to enter by, but I still can’t get rid of them.

I seem to have a particular problem with water ants, even though I keep water and food cleaned up and put away. I have children and pets, and would like to avoid using chemicals if possible. Any suggestions for affordable safe pest control inside the house? Thanks.
JT

This stuff is wonderful and it’s safe. It is a powder that comes from the skeletons of a class of algae called diatoms. You merely sprinkle the powder where you have seen the ants and its kills them by drying them up. I have even read lately that it is safe for pets to ingest, to kill intestinal parasites (although I don’t know if I would recommend that just yet).

I have used it in my home successfully against ants, and I keep cats, birds, and reptiles, none of which suffered any ill effects from the DE. You can purchase DE at a health food store, natural gardening center, or even one of those large home centers (I recently saw it with the bad pesticides at Lowe’s).
Melissa G., Licensed Raptor and Reptile Rehabilitator

No, It’s Not Breakfast!

Sprinkle cinnamon or cornmeal around the house and under cabinets. Ants don’t like cinnamon, and if they eat the cornmeal and then drink water, the cornmeal swells up and kills them. They also carry the cornmeal to their nest, so the ants there will die as well.

You can put cornmeal around outside, but you will have to replace it after it rains. Cinnamon won’t hurt anything in the house and will help your house smell good. You can just vacuum and reapply as needed.
Gerry

I was investigating herb companions for my garden and came across this tidbit. Basil repels flies and mosquitoes. To deter ants, use catnip. Sprinkle it in their paths.
P

Try a mix of borax (borateem – in the laundry section) and syrup. Put this mix along places you see the ants.
Sherwood

. It is a soap based spray (read the label for particulars). Does not contain insecticides but there is a cautionary label. Any Home Base/Depot type store should carry it.
Floyd

You can buy glue boards that can be slipped under the stove or furniture. They are inexpensive and nontoxic. But you should put them where children or pets can’t get at them because they are very sticky!
Rosemary

The only thing that helped the few times that I had an ant problem was finding out where they were getting in, and nine times out of ten it was a tree branch touching the roof of the house. They get on the roof through the tree, and then use your gutters as an ant expressway to get at the entire perimeter of the house.

Check to see if any branches are touching your roof, trim them, and then draw a line around your house with a bottle of lemon scented dish detergent (liquid). It won’t hurt your plants and ants won’t cross that line!
Jennifer

The best solution that I can offer you for ants of any kind is to build a border around your house of spearmint plants. I don’t know why they don’t like them, but it works. This keeps the little pests away, plus it makes entries smell great!
S. P.

We had a terrible ant problem. After many months of exterminators, we finally found a safe product called Terro Bait

. It’s a sugar and borax mixture in a trap. It draws the ants. For a few days, it is really gross, but then they are gone, because they take the food back to the queen/nest.
Susan in Livermore, CA

We live in Bermuda where we have our fair share of bugs. Though we don’t have anything that bites, like mosquitos or no-see-ums, we do have ants. There is a way to get rid of them without using a toxic spray.

Mix half a teaspoon of Boric Acid powder with some water until dissolved. Then add 1 cup sugar and mix together with enough water (preferably hot to help dissolve them both) until it is a runny syrup. I shake the mixture in an old jam jar to mix. Put in a container (again, a used jar is ideal) and put in a piece of paper towel so that it touches the bottom of the jar but comes over the top to touch a wall so that the ants will have access to it. If the mixture gets too thick, just add more water. Keep refilling until the ants stop coming.

The ants will ‘suck’ the mixture from the paper towel and take it back to the nest. The Boric Acid will scratch their digestive systems, killing them. At first, it may seem that you are attracting more ants and it could be days or weeks before they stop coming but you will kill the whole nest eventually. The Boric Acid is poisonous so you don’t want it accessible to children or animals. I put it around the outside of the house to attract them out rather than in, though when we first moved here my kitchen was full of them and the mixture worked in about 2 weeks – that’s a year ago and I haven’t had any ants in the kitchen since.

They also use it at the Montessori school my 8 year old son goes to because they had to spray Raid everyday (which is not good for anybody).
Jane B

Try mixing this up. It works wonders for ants.

The consistency of this mixture should be like paste. Spread onto little two inch square pieces of cardboard and place anywhere you see ants. Replace as needed. It takes about two weeks, but this will get rid of ants.
Brent S.

Win the Victory with Vinegar

When we lived in Florida, we had problems with “sugar ants.” They were tiny critters that invaded our kitchen constantly. With three cats and a dog, we were hesitant to use pesticides.

I found that white vinegar worked wonders. I filled a spray bottle with white vinegar, and every night before bed, I would liberally “mist” the countertops, floor around the garbage can, etc. and let it dry. (I suppose you could just wipe it on with a rag if you preferred). The vinegar smell disappears quickly, and it’s non-toxic and cheap.
Becki in Indiana