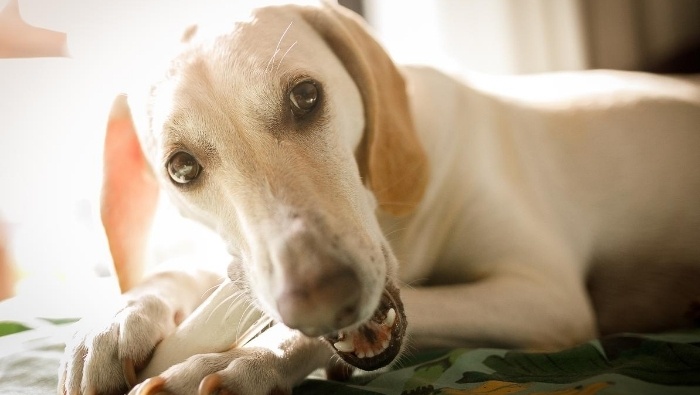 Reward your puppy with something he can chew, chew, chew. Make Fido some of these longer lasting dog chews on the cheap, cheap, cheap.

Dear Dollar Stretcher,
We have an 8-month-old puppy that just loves to chew. This puppy loves to chew more than our other dogs. Does anyone have a recipe, or know where I can find one, to make rawhides or homemade chew things to save money?

I’m not looking for treats, just some type of homemade longer lasting dog chew so my pup can chew, chew, chew.
Rhonda

We asked our frugal pet-loving readers if they had any suggestions or recipes for inexpensive homemade longer lasting dog chews. Read on for their best homemade and store-bought recommendations and recipes.

This is something I learned when my Great Dane and my St. Bernard were puppies. These guys pack some jaw power! Store bought toys just did not last!

I took old towels that had holes, cut them into strips, and braided them together. This also works with old socks, jeans, etc. and they are washable!

I also go to the local farm supply store and buy four-foot lengths of bulk rope and braid it. This I tie to their trolley (a pulley system bought at the pet store tied between two solid objects with a cord to which you tie your dog) and cover it in peanut butter. They run, pull, and race around with the rope, but are limited to the length of the trolley. This also keeps it off the ground so the peanut butter lasts longer.
Carrie in South Dakota

Here’s an easy way to create a dog chew, especially for a teething puppy with sore gums.

Start with a hand towel or a washcloth (depending on the size of your dog). Soak the towel in water or in a mix of water and salt-free bouillon. Wring out the towel thoroughly and twist it into a long sausage shape. Put it in the freezer until frozen. Give it to the puppy and let him chew! You should be there while the dog is chewing, so he doesn’t swallow any cloth pieces after it thaws.
Cindy

There is a toy out there called a Kong.

It is a rubber chew toy. It usually comes with hints about what to put in it to keep your dog interested. It has a large hole in one end and a small one in the other. You can hide pieces of dog food, peanut butter, cream cheese or any other healthy snack for your puppy in it. It keeps them entertained for hours trying to get the treats out.

I wouldn’t recommend rawhide chews every day to a puppy. Puppies are going to chew and chew and chew for quite a while! They teethe just like babies!
Renee in NC

For a dog that chews a lot, I recommend giving them a Nylabone.

These are hard tough bones made of a nylon/plastic material that come in many different flavors. You can find them at Target, WalMart or any pet store. The initial cost is a bit more (usually $6-15 depending on the size of the bone), but they last for years. They are also better on your dog’s stomach than rawhides.

Rawhide bones can be very difficult to digest and can even cause blockages, which could lead to an expensive vet trip. When a dog chews on a Nylabone, only tiny, tiny pieces come off the bone that can be safely digested.

I have also found that my dogs are less aggressive with the Nylabones than with rawhides. Dogs that have good things to chew on and lots of toys will cause less property damage in the long run.
Christina

I had the same problem a couple of years ago and I found a solution. Buy one of those big braided rope dog toys and a cheap tub of creamy peanut butter. Thoroughly rub a good amount of the peanut butter into the rope toy. The other dogs will probably be jealous, but this will keep your little chew monster busy for a long, long time. I’ve read that the threads in the rope toys could cause problems with digestion (wrapping around intestines!) if you don’t keep an eye them. So, I am sure to monitor them when I give this particular toy.

It also helps to put deodorant/antiperspirant on wooden furniture legs to keep them from getting chewed on. Good luck and please don’t give up on your new addition!
Wendy

Make Puppy Pops for Your Pup

The need to chew in 8-month-old puppies can be satisfied by making “Ice Pops” (without sticks, of course!) out of low-sodium broth. (The low salt content freezes harder.) Keep an old cotton towel under the freeze pop to keep it from sliding around the floor. Be sure to pick up the towel between chewing “events” so it doesn’t become a target! The cold is also helpful while pups are teething and have sore gums, just like infants.
Barbara

A butcher gave me this tip years ago when I had a dog that chewed up everything! Take a raw ‘beef’ bone of any size suitable for the dog, clean off as much meat as possible, and then boil the bone for at least half an hour. This will make the bone hard. They can’t be chewed up, but still have the flavor that dogs like. My dog loved her new bones and left our shoes alone.
Kristi

They’ll Have a Ball with this Dog Chew Alternative

We have a 4-year-old pug that loves to chew (on toys). In fact, his favorite pass time is trying to destroy his toys. He can pop a tennis ball and de-squeak a squeaky toy in 30 seconds.

We tried pig ears, but he would get it down to the size of his mouth and choke trying to swallow it whole. If a ball is too hard, he doesn’t like it. We tried all kinds of balls.

We finally found out that racquetballs are his favorite. We buy them in a pack of three. It took him three months to break the first one. His second one is still going strong. Our neighbors tried them also with their 1-year-old lab-pointer mix. She loves them too. The racquetball doesn’t come apart, but has enough give that they can chew it.

When the ball gets wet, it sometimes pops out of our pug’s mouth when he tries to chew on it and ricochets around the room, which really keeps him occupied. If you get your pup any new toy, always supervise them to make sure that there are no problems.
Jodi

Our best solution has been pig hooves. (I am not talking about pig ears, as those are gone in five minutes.) Our dog could chew through anything, even rawhide and big bones from the butcher, but these pig hooves last for months. Sometimes, for a special treat, we spread peanut butter on the inside of the hoof.
Julie

Just to let you know that my cocker almost died from a cow hoof. He had several and really enjoyed chewing on them. He would take them outside and leave them. One day, he found one that he had forgotten about and brought it in and I didn’t notice it was an old one that was chewed down pretty far.

The next day he woke up sick, wouldn’t eat, and after a little water, he threw up. There was the piece from the hoof, along with a lot of blood and liquid. He couldn’t pass it through the stomach and it must have bled going down or in the stomach. He threw up two more times and all had hard pieces of hoof about the size of a quarter. They had changed color and had smooth edges by then, so the acid had been working on them over night.

A similar situation had happened about a year ago and I swore off the hooves, but I felt sorry for him and so I started him up on them again. This time it is for good, no more hooves.
Rhonda