Ways To Save on Cooking Oils, Fats, and Butter 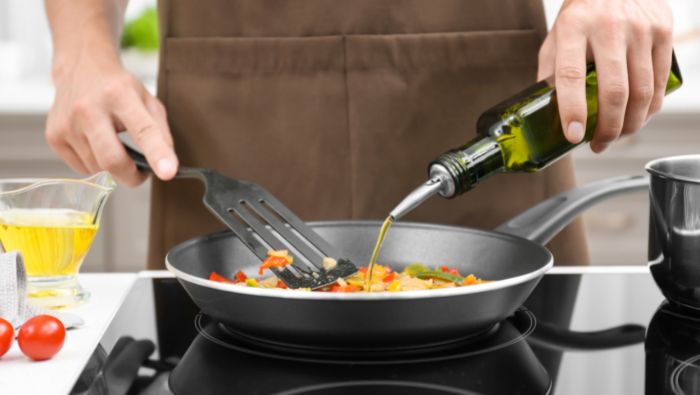 Are your cooking methods costing you too much money right now? They might be if you use a lot of cooking oils, fats, and butter in the kitchen. Here are some ways to save.

Thanks to inflation and shortages, oils, fats, and butter are one category of grocery items that have seen a significant price increase. Whether you prefer vegetable oil, lard, olive oil, or butter for cooking, these products we use almost daily are putting a considerable dent in the grocery budget.

Vegetable oils have seen the most significant price increases, according to The Washington Post. Cooking oil prices “have surged by 152 percent over the past two years, outpacing overall food inflation.” While restaurants and food manufacturers are suffering the worst from the spike in oil prices, consumers are certainly feeling it too.

Because it is costing dairy farmers more to produce milk, butter prices have also increased. The cost of butter and margarine has experienced a 19% increase over the past year.

Here is a look at ways to save money on oils, fats, and butter for cooking.

Keep in mind that the goal of saving money often conflicts with the goal of eating healthier. That is certainly the case with cooking oils and fats. For example, olive, avocado, and almond oil are healthier and often more expensive than vegetable, peanut, and canola oil.

So while this article primarily focuses on cheaper and sometimes less healthy fats and oils, sacrificing your health to save money is never a good trade-off.

Cook With the Cheapest Butters, Oils, and Fats and the Least Expensive Cooking Methods

Sometimes, finding the most significant savings in the kitchen is about knowing how to prepare foods the cheapest way. For example, vegetables can be steamed, sautéed, roasted, etc. Steaming doesn’t require any oil, so you can steam vegetables for less than you can sauté them. When it comes to fried foods, you can often find baked versions of the same recipes that require little to no oil.

If you prefer the taste of sautéed veggies over steamed, depending on prices, it might be cheaper to sauté veggies in butter rather than oil. Roasted vegetables may taste best with olive oil, but you can often combine olive oil with cheaper vegetable oil and achieve almost the same flavor.

You might have to do a little experimentation in the kitchen, but you’re sure to come up with cheaper ways to prepare your favorite foods.

Related: How an Old-School Grocery Price Book Can Save You Hundreds

If you cook bacon and are not saving and reusing your bacon grease, you are throwing out a significant source of savings. Bacon grease can be used in the place of butter when frying or sautéing foods. Depending on your tastes, it can even be used in some baking recipes, such as for biscuits.

According to Southern Living magazine, bacon fat can be stored for up to three months in the refrigerator or the freezer indefinitely. The best place to keep it is in the fridge, which will keep it soft. Just date the container, so you know when to throw it out.

To save money when frying foods, always use cheaper oils such as vegetable and canola unless you have dietary restrictions or do a lot of frying that would make it healthier to use olive or another type of healthy oil.

When it comes to saving oil, you typically want to reuse saved oil for the same purpose you used it the first time.

For example, save the oil used to fry vegetables to fry more vegetables. Save oil used to fry fish to fry more fish. This is primarily because fry oil will often hold the flavor of the foods fried in it. So unless you don’t mind your homemade French fries tasting like fish, reuse your saved fry oil for the same purpose.

According to bon appetit, the steps for saving frying oil are similar to those for keeping bacon grease:

Store the oil in a cool, dry place. You can reuse this oil a few times before you have to dispose of it. However, with each high-heat application, the oil breaks down further and will continue to take on the taste and smell of whatever you’re cooking.

According to AmericasTestKitchen.com, you can reuse oil three or four times for frying breaded or battered foods. You can reuse oil as many as eight times or more for other foods.

When the oil starts to get cloudy, dark or gummy, discard it. However, the most telling feature of spent oil will be its smell: once it smells rancid or sour, it’s time to dispose of it.

Stock Up On Butter and Freeze It

Savings for Those With Dietary Restrictions

Dietary issues can make it hard to save on oils if you cannot eat bacon grease or vegetable and canola oils. In this case, your best source of savings will likely be watching for store sales on healthier oils or buying in bulk.

Related: Buying in Bulk: An Investment Anyone Can Afford

How to Save Money on Cooking Oils, Fats, and Butter

To summarize the tips for saving money on cooking oils, fats, and butter: