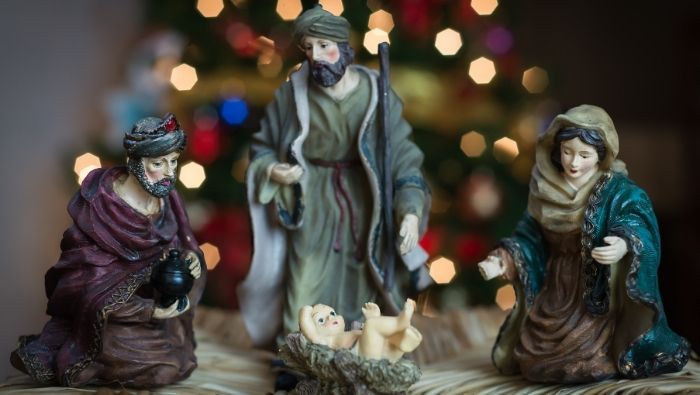 Notice: This story is of a religious nature and discusses issues of faith. If you’re offended by this type of material, please accept my apologies and skip to another article.

There are those who will tell you that a dream is the subconscious trying to get out. Then again, there are those who say you shouldn’t eat pepperoni pizza before bed! What I do know was that it seemed so real that I wouldn’t be surprised to find a snapshot show up in a photo album some day.

Just like the famous story, it was indeed the night before Christmas and everyone was asleep in their beds. And like all good Christmas stories, it was cool so I was wrapped snugly under a blanket.

I drifted off to sleep and then it began. Well, let me just tell it to you as it occurred. I awoke in the middle of the night and was drawn downstairs. Trust me, I’m the last guy to try to sneak a peek at Christmas presents, but there was an irresistible urge to take a look at the packages under the tree.

When I got down on my hands and knees I spotted a beautifully wrapped package that I hadn’t noticed before. It had my name on it. Then I did something that is completely uncharacteristic of me. I opened the gift. Right then. In the middle of the night, in the dark, all by myself.

But that wasn’t the biggest surprise. What was inside the box was truly remarkable. I don’t know how to describe it except that the box was filled with joy. It was as if my heart had been filled with a happiness that I couldn’t explain or contain. I just knew that I was smiling. The gift was a gift of happiness and joy.

No sooner had I closed the first box when I noticed another package. The contents of this box, too, were most unusual. When I opened it, it was as if it contained a window to heaven. I could look into the box and see an incredible distance. Everything was clean and bright. I reached into the box and there was no bottom to stop my hand. It was just as if I had tried to step into the box I would have stepped right into heaven! What a wondrous gift I thought.

Then another package caught my eye. It had brown paper with a white ribbon. When opened it displayed a piece of rope about fourteen inches long. It was tied in a tight knot. The knot looked as if it had been tied years ago. I didn’t think that it could be unknotted with any amount of effort. But then I picked it up and to my astonishment it unknotted itself and returned to its once original form of a flexible piece of rope. I wondered about it. And then before my mind’s eye played a panorama of things and people that were once tightly bound and were miraculously set free. They sang and danced with joyous abandon.

But that wasn’t the last of the gifts. There was a box wrapped in impressive blue paper. I unwrapped it and looked inside. It contained an embrace. Not just any embrace, but a hug that radiated power and love. It was as if a long lost brother had been found and wanted to show just how much he loved and missed me. Somehow, I just knew that the feeling would never leave me.

There was still one more gift, yet for some reason I hesitated before opening it. It was oblong. About fourteen inches long, eight wide and six high. A glossy white paper with fastidiously neat corners. White ribbon and a white bow such as none I’d ever seen. Looking back now I’m not sure, but I think that my hands trembled a bit when I opened it.

As I lifted the lid I distinctly remember a sharp gasp escaped my lips. For inside was a manger with a baby. The purest light I’d ever seen emanated from the child and filled my senses. I gazed at him and my eyes began to tear. This was a gift of infinite value. Never again would I be given anything so precious.

After that I remember nothing until morning. Until my children woke me up and dragged me downstairs by the hand with the usual excitement of children on Christmas morning..

I know you’ll think that this story is crazy. I do, too. And yet, even though none of the presents were still under the Christmas tree the next morning, it felt as if I possessed each of those gifts and had them hidden in my heart. And there was a deep and abiding sense of joy in my soul. And it’s still there to this day.

Perhaps you’ve wondered why Christmas seems so empty after it’s over. We enjoy the warmth of family, the joy of a child on Christmas morning, all the decorations and the love that people share so willingly at Christmas. Yet, when it’s all over there’s something missing.

If you’ve felt that way, it might be that you need to meet the one whose birthday we celebrate, Jesus. He’s the ultimate ‘saver’. His reason for coming to earth was so that you and I could be ‘saved’ to live joyfully and forever with God.

You don’t need to ‘clean up’ your life before you talk to Him. In fact, you and I don’t have the power to do it. And He doesn’t expect it. He wants you just the way you are. With whatever fear, problems and addictions that come with you. Just tell Him that you want His power to overcome these issues.

If you’d like to meet this Jesus personally it’s easy. You can do it right here, right now. Just honestly ask Him to come into your life. Tell Him that you want to know Him. As a friend. As a Savior.

It’s that simple. You don’t need a televangelist. Or a church. Or a minister or priest. Just you and Jesus. And a simple request from you asking Him to come into your life.

If you just talked with Jesus, be prepared. You’ve just been given a new life. Free! A life that will last forever. The best bargain and greatest gift ever known. You probably feel a little funny. Like maybe you should tell someone. Do it! Tell your boyfriend, your wife, whoever. Or if you’re not sure who to tell send me an email with the news. Oh, and one last thing…