When to Involve Children in Family Finances: Parents Weigh In 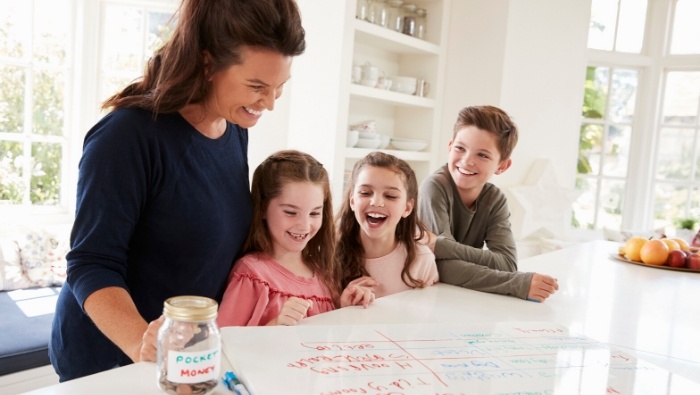 Does involving kids in the family finances help them learn about money? Or just cause problems? Readers weigh in on this sensitive topic.

Gary,
I was wondering what you think about whether children and/or teens should be involved in the family finances. I think it could be a good tool for our kids to learn about what it takes to manage money and what a tight budget looks like (we are currently working our way out of debt), but my wife is a bit reluctant because she does not want to cause them any worry that we are hurting financially.

What is a good age to start involving them and how should we involve them? Our youngest is 7 and the oldest is 15. Should we show them our budget? Should we explain to them why and how we came into debt? Our savings balance? Any tips for helping them understand what it really means to manage finances once they are on their own would be much appreciated!
Garrett

Developmentally, children are able to understand basic money concepts at around age 10. This can be the time to start a discussion with your children.
Ellen

Cure a Case of the “Gimmies”

When our children were in grade school, they came down with “the gimmies.” I went to a thrift store and bought two Monopoly games (we already had one at home). Then we sat down with the kids and showed them how much their dad earned every month (using Monopoly money). Next, we took money out of the kitty for each of our bills and groceries.

When we got done, there wasn’t a lot left. They soon were on board with why we had to be careful with our spending and why some things had to wait while we saved up for it.
Connie

Related: What a ‘Wish Jar’ Can Teach Small Children About Spending Choices

While we don’t want to burden or instill anxiety, there are productive ways to involve children in finances.

Let them observe each month when utility bills are paid. It helps them understand the need to turn off lights. Let them help plan family meals using a budget and a shopping list. It will change how they view food waste.

Children don’t need to understand our money mistakes. They need solid life skills, so they make fewer or none
D.S.

Teach Them to Live Frugally

I always took one of my kids to the supermarket with me and involved them in finding the best deals. It was also a great math exercise. They grew up thinking, “Mom has coupons and coupon codes for everything!”

When they wanted expensive jeans or sneakers, I told them we could afford the least expensive versions, and I would contribute that amount toward the purchase if they wanted to earn the difference on their own. Also, I took them to garage sales, consignment stores, and Goodwill. (See A Teen Clothing Allowance as a Money Tool.)

When my son was in 5th grade, his teacher gave a great assignment. She “gave” them each $1,000 and a car. With gas at $1/gallon, they had to take a trip of at least 1,000 miles. They had to pay for gas, food, hotels, and entertainment. My son asked the teacher, can I use coupons? He “took a trip” from Florida to Cleveland, OH, clipped restaurant coupons from the Sunday paper, “bought” a $3 frequent-guest card for a discount motel chain that had free breakfasts, “went” to the Rock ‘n’ Roll Hall of Fame and a Cleveland Indians game, and then “went” on a day trip of deep-sea fishing on his way home.

Because of his couponing and frugality, he went farther and did more than any of his classmates. And got an A+! The tools may have changed a bit, but the lesson still is true!
K

My parents never involved their four kids in family finances. They didn’t consider it our business. They may have had a good point.

When kids know everything, they tend to talk about it to their friends, so everyone else will know your financial situation. Also, I have noticed over the years that when you let other people know how much money you have, they seem to think they can advise you on how to use it. They tend to be more judgmental when you spend money because they might think it was better spent in other ways.

It Is Never Too Early to Start Teaching

You can never start too early to involve children in day-to-day financial activities. When they become adults, there’s no question about how to begin or where it ends. It doesn’t end.

I began teaching my son how to grocery shop, menu plan, and budget at nine years old. The money saved went into his pocket. He earned it, so it was his. It made saving “real.” He realized early that home making was a real job, and it took brains and motivation to make it work. I taught him how to do laundry (how to make his own cleaners, laundry detergents, and dish soaps) and how to clean the home and why. He is a home maker for a busy family now. I left it to his father to teach him how to maintain his vehicle and do lawn work. He never worried about our finances because he had done his part and he knew we would do ours.

At this time, we also had weekly family meetings, which outlined the plan of attack for the week, what had to be accomplished, and the reward when we reached our goals. Often the rewards were frugal, but there was active anticipation of those rewards. He uses this system for his own family now. This is real life, and this will teach children what is needed and expected of them when they become adults.
LynAnne

Related: Things My Father Taught Me About Living Better for Less

When my children were young and I was a newly single parent, times were tough. I sat them down and explained the problem. I told them how much money came in each month. Then we started subtracting the fixed expenses. When we finished subtracting the rent, electricity, heat, groceries, etc., there wasn’t much left. I told them we weren’t poor, but we just didn’t have much money.

I explained that according to world standards, we were rich. We had a roof over our heads, food to eat, and a lot of love. I explained that to get the extras (like going to the fair), we would have to save money somewhere. We designated a small jar to hold our fair fund. Any change left at the end of the week went into the jar. When the kids asked for something that caught their eye (like a gumball), they had to choose if the coin went into the machine or the fair fund. The kids were soon turning off lights and checking out prices at the grocery store. They got very good at saving money.

One year they decided they wanted a tent. My father told them he would match whatever amount they saved. By the time camping season came around, they were ready. Both kids were still in elementary school, and at the time, our version of going out to dinner was a picnic in the park. Treats were things like homemade candy, potato chips, popcorn, and home-canned fruit.

Christmas was also homemade. I started right after Christmas to sew, knit, etc. for the next one. One year, someone put our family in for a Christmas basket. When the nice person left, the kids asked, “Does this mean we aren’t rich anymore?” I told them we were as rich as we ever were, we just didn’t have much money. They just looked at me and said, “Well we knew that!”

I always told them we were rich because we had our basic needs met and we had a lot of love. I didn’t want them to get a “poor me” mindset. Years later, when they were grown and had families of their own, I told them how sorry I was that I wasn’t able to give them the kind of life they could for their children. Their reply was they felt they had a good childhood and wished they could have another “homemade Christmas.”
Leila

Debt trouble? We can help.

If circumstances have put your family in debt, we can help you create a plan for conquering it. One that is personalized to your family's budget and lifestyle.

Start Teaching Sooner Rather Than Later

I would say that you should include your children. Give a total budget explanation to the eldest, and for the youngest, part of her allowance should be saved, if only a few pennies. In my opinion, the sooner you start the better.
Ann