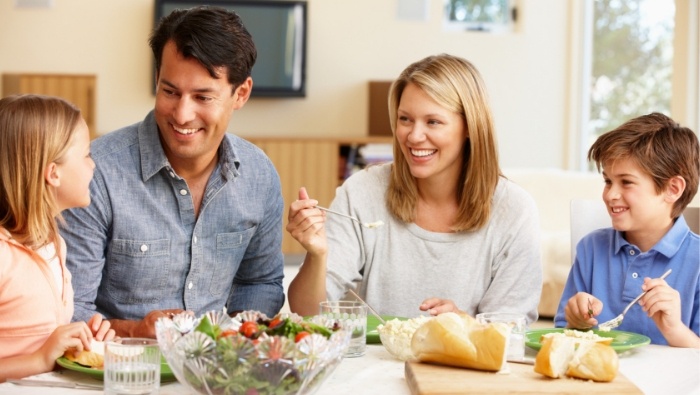 Make some time this week to dust off that old cookbook or search the internet for some easy recipes so you can cook up some family meals along with some financial savings!

If you don’t eat out often, but your family is glued to their screens during meals or even eats in different rooms, you’ll reap even more financial benefits by sitting down together during a meal. So clear off your dining room table, turn off the devices, and enrich your family’s life in more ways than one.

Just turning off the television and eating at the table will save money.

Numerous studies, including one by researchers at the University of Birmingham, have found that distracted eating contributes to eating more. Participants in the Birmingham study not only consumed more food while distracted by something like watching television, but they also ate more later in the day than the control group because they didn’t have a strong memory of what they ate while distracted.

If your family eats less food, you have to buy less food. That’s both money and calories saved. Gather the family and make some food and non-food memories together.

Related: Could Distracted Living Be Costing You?

Researchers at Cornell University have found lower rates of childhood obesity in families that eat more dinners together at the table. Eating anywhere but the kitchen or dining room table was linked with higher incidences of obesity in children and adults alike.

Obesity carries a staggering medical price tag. Medical Economics reported on a 2018 study from the Milken Institute Center for Public Health that obesity and overweight risk factors accounted for more than $1.5 trillion in healthcare costs and lost productivity. In addition, obesity contributes to an increased risk of many other expensive health problems like Type 2 diabetes, heart disease, and certain types of cancers.

Establishing a dinnertime dining room date can lower your risk for some serious health problems and their associated healthcare costs.

3. Family dinners may improve your child’s chances of successful employment.

There are also long-term financial benefits of family dinners for children.

A meta-analysis of research on the subject by the American College of Pediatricians reports that four or more family meals a week improve children’s language skills, family relationships, and social skills among other benefits.

In an age of increasing automation of the job market, social skills are more crucial than ever to career success for young people. According to an article by David Deming for the National Bureau of Economic Research, the number of jobs requiring social skills grew by 12% from 1980 to 2012. This is quadruple the amount of growth experienced by jobs requiring strong STEM area skills like mathematics.

4. Family dinners may help your children spend less on food as adults.

The cooking skills kids learn by helping to make dinner each night can also prove to be a financial boon.

According to Money magazine, cooking at home is cheaper than eating out, and the savings are getting larger as restaurant price increases far outpace increases in prices of groceries. The cooking skills that kids learn by making family dinners can save them lots of money when they’re grown and living on their own.

How much? A simple-to-make meal like spaghetti with meat sauce for four people costs $35 through Olive Garden’s take-out menu. A pound of Barilla spaghetti noodles, a jar of Ragu sauce, and a pound of ground beef costs less than $10 at Walmart. That’s just one example.

Extrapolated over the decades your children will live on their own, knowing how to cook could save them thousands of dollars.

So dust off that old cookbook or search the internet for some easy recipes and cook up some family fun for some financial savings!