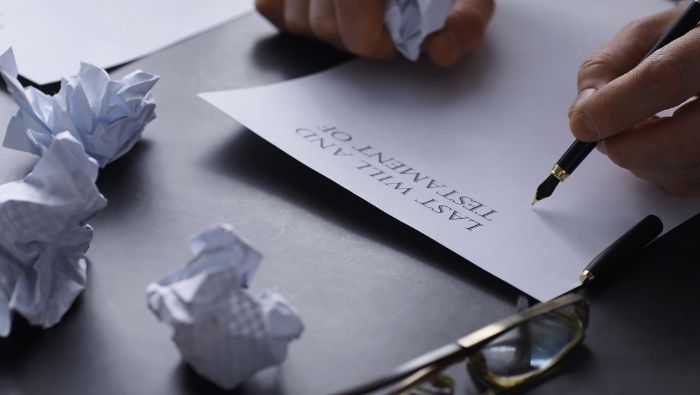 Is setting up a living trust or will something you can do on your own without paying a professional? Maybe. But heed these cautions when setting up these very important legal documents without a lawyer.

Dear Gary,
Do you have any recommendations on how to set up a living trust without paying high priced lawyer fees? By the time we are done working with our local lawyer who has a good reputation, it will run just over $1,000. We have children and need to make plans just in case.
Julie in MI

Julie is to be congratulated for making “just in case” plans. Far too many parents assume that nothing will happen to them and fail to take the necessary precautions.

Unfortunately, the simple answer to her question is “no.” I don’t advise trying to set up a trust without a lawyer.

But let’s look a little deeper into Julie’s question. Perhaps it won’t be as expensive as she thinks.

We’ll begin by considering a frugal truism. Avoid making expensive mistakes. A problem with your will or some trusts are almost impossible to correct. There’s a reason that they call it your “LAST will and testament”. Once you’re dead, you cannot amend or revoke it.

Being a sharp consumer doesn’t mean always taking the least expensive alternative. In fact, doing that can sometimes cost you more in the long run. This is probably one of those cases. (See 10 Smart Ways to Spend Your Hard-Earned Money.)

In fact, not only should Julie contact an attorney for her will or trust, she’d also be wise to find one that specializes in estate planning in her state. There are some nuances that an attorney who works in another area of law or another state might not know. In fact, if you move to a new state, it’s important to see if your estate plan should be updated.

Let me be clear about this. I’m not a big fan of attorneys. Wills and trusts are more complicated than they need to be. And attorneys are a large part of the reason that they’re so complicated.

But the unfortunate truth is that it does take specialized knowledge to do them so that problems don’t crop up after your death. Not only with federal taxes, but also with state laws. And much as I don’t like paying lawyers, the cost of doing it wrong could be very expensive for my children. So finding a lawyer who knows estate planning is likely to produce the right document at the lowest cost.

Expert Interview: Common Estate Planning Mistakes and How To Avoid Them

Resist the temptation to DIY your living trust or will

Julie might be tempted to consider some of the do-it-yourself will kits available. No doubt that some are quite good.

Just remember that you’ll die believing you did a great job. A problem won’t come out until some judge says that your will or certain portions are invalid. So make your selection carefully.

Related: Getting Your Family’s Financial and Legal Affairs In Order

You might not need both a living trust and a will

So what should Julie do? She doesn’t say so, but it could be that her concern is simply for her children’s welfare. If that’s the case, a living trust probably isn’t required.

A living trust is often used to avoid federal estate taxes. And that usually isn’t a problem until you have over $1 million plus in assets.

So if Julie’s goal is simply to make sure that if she and her husband die that the money goes to her kids and that she gets to select the children’s guardian, then a living trust isn’t necessary. Typically a will, which costs less, can handle the job.

Selecting a guardian is important. Remember that each state sets an age where a child is considered an adult. Until that age, they cannot manage their own financial affairs.

The guardian could be an individual (for example, your sister, friend or attorney) or a corporation (a bank or trust company). There are various ways, including trusts, to set it up legally. You also have the option of letting the guardian control the money even after your children reach adulthood. Discuss it with your attorney.

Another reason this process, called estate planning, is important is that if you don’t make your wishes known in writing before you die, the state will follow its own laws and make the decision for you. Not only as to managing the money, but who will raise your children. Your irresponsible bachelor brother could be asked to care for them.

This is also a good time for Julie to talk with her choice and make sure that they’re willing to accept the responsibility.

Related: End-of-Life Planning Everyone Needs To Do

One final word of caution. I am not a lawyer and this isn’t a place for amateurs. All I can do is warn you of the potential dangers. So before you make any decisions, contact the appropriate experts. Yes, experts do cost money. But this is one area where saving can be very expensive.